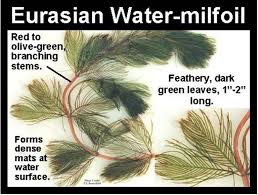 Eurasian Milfoil was discovered in Lake L’Homme Dieu in 2011.  It was limited to a localized area in the northwest section of the lake.  It was treated with removal by scuba diver and herbicide.

The involved area had slowly spread but continued to be in the northwest corner.  The area treated also increased and in 2017 was 11 acres.  The cost of the slow release granular herbicide also increased from $700/acre in 2011 to $1,600/acre in 2017.

The DNR survey in 2018 found 3 isolated infestations of milfoil in the same general area and they again recommended treating 11 acres.  This would cost $2,100/acre.  Our consultant, PLM from Brainerd, Minnesota, suggested treating just the infested areas with a stronger but less expensive herbicide.  The DNR agreed and these areas were treated for a total cost of $500.

The Lake L’Homme Dieu Association board had hired a total lake survey in 2015, and no further milfoil was found.  Having some additional funds available due to the decreased cost of treatment this year, we decided to do a more detailed survey.  We hired RMB labs from Detroit Lakes to survey the entire lake.  Sadly, they found 3 additional scattered areas of milfoil.  No further treatment is recommended at this time of the year.

We are still processing this upsetting news.  We will continue to work with the DNR and our consultants to use the best possible methods of control.  I was recently at an AIS (Aquatic Invasive Species) seminar at the University of Minnesota and learned that slow progress is being made, but there is no method of eradication at this time.